Local MP Alex Cunningham has joined green campaigners and a solar-powered hot air balloon outside Parliament to show his support for clean, green heat for businesses and homes. 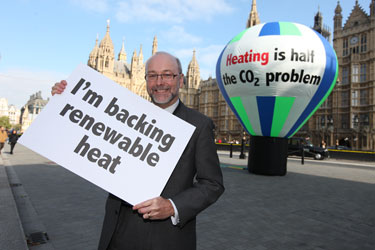 Along with farmers, businesses and many other organisations, Alex is calling on the Government to honour its promise to bring in a Renewable Heat Incentive that would encourage people to switch to planet-friendly heating.

During the last Government, all parties pledged to introduce this incentive in April 2011, but now reports suggest it could be delayed or watered down in the 20th October spending review.

“Heating our homes and businesses shouldn’t heat the planet – encouraging clean, green heat is essential if we’re to cut climate-changing carbon emissions. I’m backing a Renewable Heat Incentive that will create jobs and help people save money on fuel bills.”

“It’s great that MPs like Alex Cunningham are supporting the switch to planet-friendly ways of heating our homes and workplaces.  The Government must prove its claim to be the greenest ever is not just hot air, and introduce the Renewable Heat Incentive as promised.”