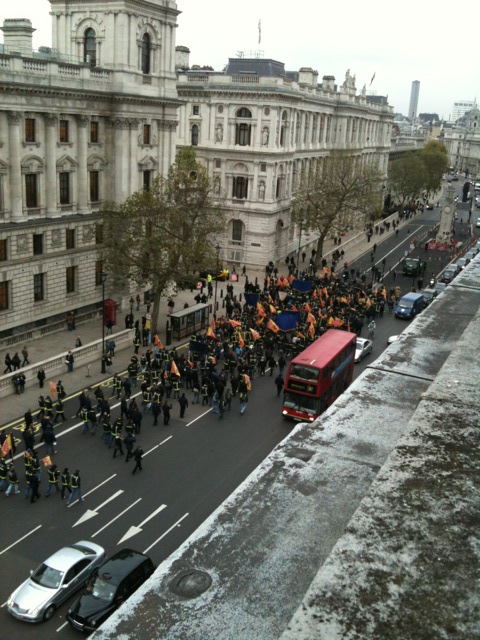 Alex Cunningham, MP for Stockton North, met with members of Cleveland Fire Brigade who were taking part in an FBU lobby of Parliament against cuts to the Fire and Rescue Service budget.

Hundreds of FBU members descended on Westminster to demand answers from the Coalition Government about how Fire Authorities across the country are expected to cope with a 25% cut in funding from central Government.

After meeting with local FBU members, Alex said:
“Cleveland Fire Authority does an excellent job but with a £6 million drop in funds I am concerned that they will not be able to maintain the level of service local people expect.

We have heard today that at least 170 jobs are to go at the Tyne & Wear Fire Service which will surely mean an increased risk to local people there. We do not want to see the same happen on Teesside.

Cleveland Fire Authority operates in an area with large numbers of hazardous chemical sites, a danger not acknowledged by the level of funding it receives. We all acknowledge that the Government has to make cuts, but lives should not be put at risk and I fear that these cuts will do just that.

Last month I wrote to Bob Neill MP, Minister in charge of the Fire Service, to ask him to come and see the special challenges faced by Clevleland Fire Authority. I am still waiting for a reply.”