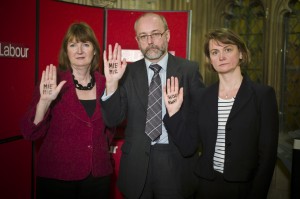 “These elections are designed to perpetuate military rule and it is clear they will not be free and fair. Many of those MPs who were democratically elected in 1990 are now dead, in prison or in exile. We must not forget them and must each do our bit to remind the world of their plight.”

“Amnesty International is doing a great job to keep the pressure up and I am proud to be able to do my part to support their campaign.

“I was particularly moved by the case of 40 year old Mie Mie, who was sentenced to 65 years behind bars for her involvement in anti-government protests in 2007. She is one of 2,200 political prisoners in Burma.”

“The people of Burma continue to have their basic human rights denied by a brutal dictatorship. These elections could have been a turning point for Burma. Instead the military junta has suppressed opposition parties and imprisoned 2,200 political prisoners, including Aung Sung Suu Kyi.

“It is vital that people across the world show their support for Aung Sung Suu Kyi and all the people of Burma. I am calling on the Burmese regime to release Aung Sung Suu Kyi, along with the 2,200 other political prisoners in Burma, without imposing any restrictions on their rights.”

“The situation in Burma today is a tragedy. These elections should have been an opportunity for the Burmese people to choose their government in free and fair elections. But the military dictatorship has made sure that will not be the case by preventing Aung San Suu Kyi from standing and for continuing to hold more than 2,200 political prisoners.”

“We will not abandon the people of Burma – the political prisoners in prison, those who face repression just for speaking out and those who are still suffering the effects of the devastating floods two years ago.

“They cannot speak out, so we must and show the people of Burma that they are not forgotten. The international community must continue to put pressure on the Burmese regime and continue pressing for the immediate release of Aung San Suu Kyi to ensure the return of democracy to Burma”