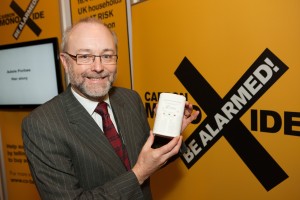 Stockton North MP Alex Cunningham has urged local people to protect themselves against the deadly threat of Carbon Monoxide poisoning. New research from the ‘Carbon Monoxide – Be Alarmed!’ campaign shows that 68% of households in the North East could be at risk of poisoning by not having an audible Carbon Monoxide alarm.

Carbon Monoxide – known as the silent killer – is a highly poisonous gas that has no colour, taste or smell, making it impossible to detect without an alarm. It is produced when fuel-burning appliances, such as gas boilers, cookers or fires, are incorrectly fitted, badly repaired or poorly maintained, or if flues, chimneys or vents are blocked.

Alex is supporting the campaign which encourages people to ensure they have an audible Carbon Monoxide alarm and that they have all fuel-burning appliances serviced annually by a registered and qualified engineer. Alex said:

“I worked in the gas industry for 17 years so am well aware of the dangers posed by deadly Carbon Monoxide Poisoning. Any campaign which makes people more aware of the potential killer in their home can only save lives.”

Alex calls for action on superfast broadband installation in Hardwick