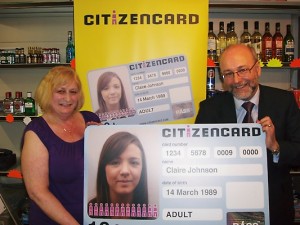 Local MP Alex Cunningham today (Friday 18 February 2010) called on local retailers to support the ‘No ID, No Sale!’ campaign which seeks to ensure that only adults can buy alcohol, tobacco and other age-restricted goods. Alex was speaking at Addisons Newsagents (Church Road, Stockton), where he was joined by Julie Tate, 18-year old CitizenCard cardholders Connor and Danny, and CitizenCard’s Marketing Manager Nigel Catlow.

The Stockton North MP said that following the new government’s decision to abolish National ID cards, schemes such as CitizenCard were essential:

“I’m urging all young adults in Stockton to obtain a CitizenCard or similar ID that contains the police-endorsed PASS hologram. Only then can retailers fully implement the ‘No ID, No Sale!’ policy which allows adults to buy whatever they wish whilst ensuring that children cannot buy alcohol, tobacco and other restricted goods.”

Julie Tate reminds her staff that they face a fine of up to £10,000 if caught persistently selling alcohol to under-18s:

“We have no wish to supply alcohol or cigarettes to children and we offer our younger customers a CitizenCard form which means they can prove their age. Every week we face dozens of attempts to buy alcohol and tobacco by young people and if they cannot present valid ID we always refuse the sale.”

More than two million CitizenCards have been issued across the UK since the scheme was launched by then Home Office Minister George Howarth in February 1999. The new government has continued the previous government’s policy of supporting the police’s endorsement of CitizenCards and other cards bearing the PASS hologram.