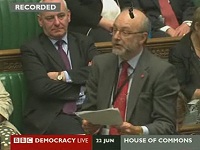 MPs have backed a call from local MP Alex Cunningham to introduce a ban on smoking in cars when children are present.

Stockton North is ranked 15th in the British Lung Foundation’s league table of ‘parent smoking hotspots’ and Alex has been working closely with them to highlight the dangers of passive smoking.

“When the British Lung Foundation teamed up with Mumsnet to find out the views of parents on smoking, over 85% of them supported a proposed ban on smoking when children are present.

“We already have legislation that bans smoking on buses, trains, planes and taxis. I remember when people were allowed to light up on public transport and that was considered normal; I think most would agree attitudes have changed significantly.

“Adults can make up their own minds about smoking. It is children we need to protect.”

Following his speech, Conservative MP Phillip Davies spoke against the proposal, and a vote was forced on the issue. MPs voted in favour of the Bill moving to a Second reading by a majority of 78 to 66. After the vote, Alex said:

“I am really pleased that MPs have voted in favour of my Bill and a little sad Mr Davis forced a vote on a children’s health issue. He spoke of freedom for smokers – I spoke on freedom for children. I had support from Conservative, Liberal Democrat, Labour and other MPs which shows the strength of support there is for this issue.

“I just hope the Government is listening and doesn’t dismiss a ban without looking at the tremendous health benefits it would bring about.”

Alex MP’s smoking bill reaches the next stage in Parliament

Make a pledge to keep your car smoke free