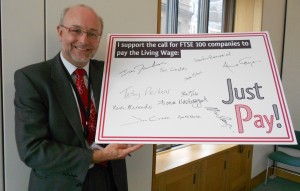 Local MP Alex Cunningham is calling for the biggest companies on Teesside and across the country to pay their workers a Living Wage.

Alex has signed an Early Day Motion in support of the JustPay! campaign for Living Wages in the FTSE 100 and is now calling on constituents to ‘activate their money’ for Living Wages.

His intervention comes in light of the fact that 3.5 million people in the UK earn less than £7 an hour whilst the chief executives of the UK’s largest companies earn an average of £4.2 million per year. FairPensions, who campaign for responsible investment, are asking members of the public to ‘put their mouths where their money is’ and lobby Britain’s banks and insurers on low pay at www.activateyourmoney.org.

“With CEOs in the FTSE 100 often earning more in a day than their lowest paid workers earn in a year, it is hard to maintain the argument that the Living Wage is unaffordable.

“The Living Wage make sense not only for the millions of people on poverty pay but also for businesses who would benefit from better staff retention and less absenteeism through illness.”