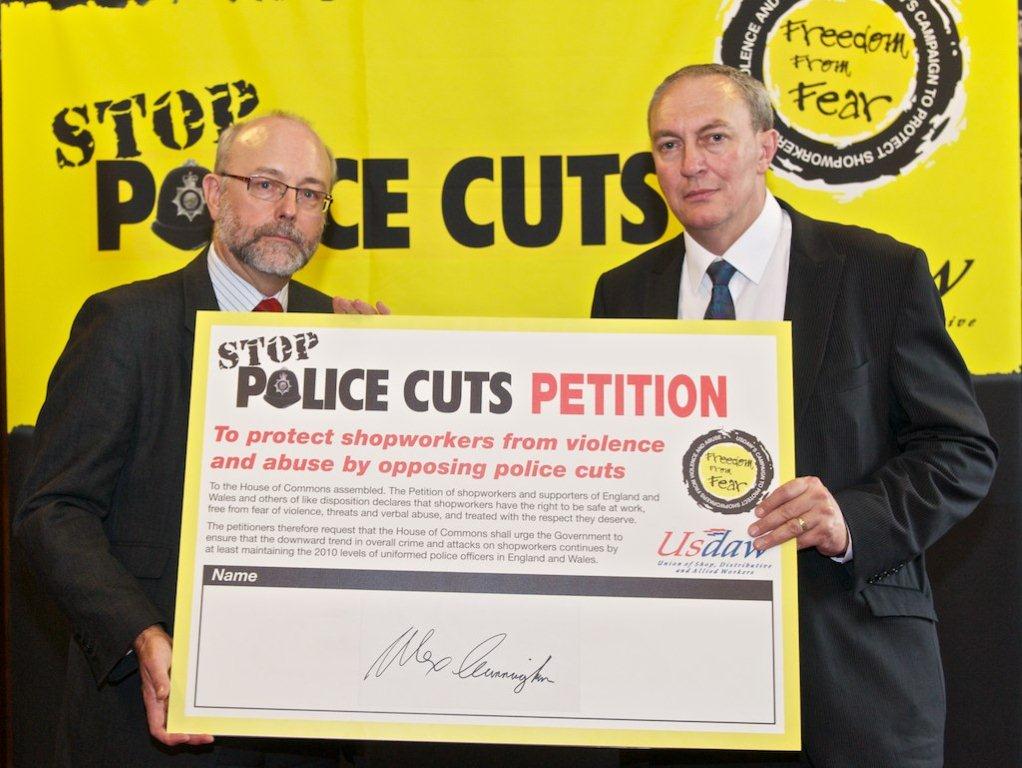 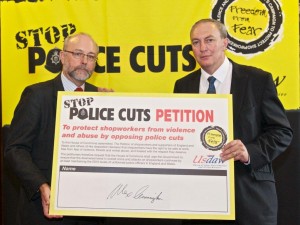 The shopworkers’ Union Usdaw has launched a campaign against the police cuts with local MP Alex Cunningham and has branded the Tory-led Coalition’s attack on police budgets a threat to the safety of all shopworkers.

The Union has produced a leaflet and petition against the cuts and will use its annual Respect for Shopworkers Week, which takes place between 7–11 November, to urge shoppers and members of the public to back the campaign and sign Usdaw’s petition. Usdaw General Secretary John Hannett was joined at the launch in the House of Commons by Alex Cunningham MP.

“Every minuteof every day another shopworker is assaulted, threatened or abused. That is why one of Usdaw’s major campaigns is called Freedom From Fear.  Shopworkers should be free from the fear of violence, threats and verbal abuse and it should never be accepted as just a part of the job.

“Under the Labour Government, violent incidents against shopworkers halved because Labour invested in 12,000 additional uniformed police officers.  Does anyone really believe that by cutting frontline policing, crime will continue to fall – as it did with Labour?  That is not the logical conclusion I draw.  I fear that when these cuts bite we will be left with a much less effective police force that will be grossly under-staffed and terribly demoralised.

“Alex Cunningham MP has done a first rate job opposing the police cuts and our members in Stockton North are delighted to have his support.”

“The first duty of Government is to protect us all.  That is where this Tory-led Coalition will fail us with their  unprecedented cuts in funding that will affect frontline policing.  Don’t just take my word for it – the Police Federation are saying that ‘20% cuts to policing are criminal’.

“1726 frontline officers are needed in Cleveland Constabulary in order to keep communities safe, however with a predicted reduction in frontline police officers from the current 1680 to 1460, I am very concerned about the effect on local crime levels.

“We know that Labour’s investment in police made a real difference.  Crime fell by 43% because the Labour Government
put thousands of extra officers on the street, created PCSOs to give a higher profile to street policing, formed neighbourhood police teams and gave the public a greater say in how their communities are policed.

“I share Usdaw’s concerns and that is why I welcome their excellent and necessary campaign, which I very much support.  High profile policing is crucial to keeping workers, shoppers and everyone safe in our communities and that can only be achieved through proper Government support and investment.”

You can sign Usdaw’s petition against police cuts by visiting: www.usdaw.org.uk/FreedomFromFear