Stockton North MP Alex Cunningham met with the White Ribbon Campaign to show support for their work to reduce violence against women.

The White Ribbon Campaign is the largest global effort of men working to end violence against women. White Ribbon Day falls each year on 25th November, the United Nations International Day for the Eradication of Violence Against Women.

“Every week in the UK, two women are killed by a violent partner or ex-partner, and during their lifetime 1in 4 women will experience domestic violence. Involving men in prevention of all the violence against women is vital, which is why the work of the White Ribbon Campaign is to be applauded.

“To mark the International Day for the Eradication of Violence Against Women I will be wearing a white ribbon – a personal pledge never to commit, condone or remain silent about violence against women.” 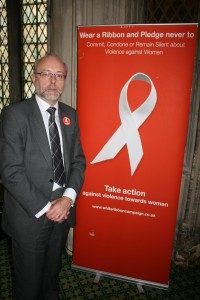 “Parliamentarians enter Parliament in order to make their community a better place. There is no more important way to do this than by working to eliminate violence against women. It is particularly important for male parliamentarians to be involved, and they can do this by being active supporters of WRC UK. We welcome the support of individual MPs for our work, and for the support they offer organisations which work with victims. This time of economic hardship and cuts in services creates pressure on families.  MPs should work to protect service provision in their areas and at this

More information about the White Ribbon Campaign can be found online at www.whiteribboncampaign.co.uk.

Government is shifting in favour of smoking bill