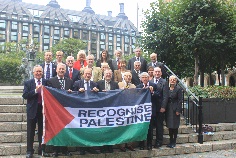 Stockton North MP Alex Cunningham is supporting a cross-party campaign to boost attempts to bring about peace in the Middle East and persuade Foreign Secretary, William Hague, to back the motion for Palestinian statehood at the United Nations General Assembly due on September 27th.

William Hague has yet to announce how the UK will vote at the United Nations and attempts to force him to make a statement or answer an urgent notice question have so far been unsuccessful.

Last year the Foreign Secretary announced he would abstain if the issue came up at the UN Security Council but added that he “wouldn’t necessarily vote the same way” in a vote at the General Assembly.

Over 130 of the 193 countries in the UN have already recognised Palestine as a state on a bilateral basis and have diplomatic relations at ambassador level. This makes it almost certain that the motion will pass with a substantial majority despite the pressure that the US and Israel will put on their allies to vote ‘no’.

Palestinians are confident that UN recognition will make a very significant difference, allowing them to join international organisations and enabling them to negotiate with the Israelis as an equal at least in terms of international law.

Labour leader Ed Miliband has already declared that he will support statehood for the Palestinians at the UN and there is widespread support among Liberal Democrat MPs, many of whom have visited the West Bank and Gaza.

“If we are ever to achieve peace in the Middle East then both Israel and Palestine must both be recognized as nation states. For too long the international community have failed to follow through on our clear obligation to recognise the Palestinian right to self determination.  UN recognition of Palestine is an important first step in allowing these two nations to live peacefully and equally side by side. I urge William Hague to do the right thing and stand up for the rights of the Palestinians.”

Alex calls for clarity on enforcement of smoking law