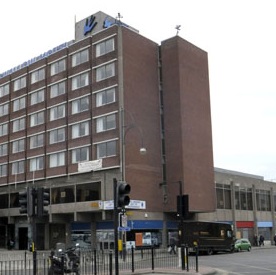 The future of the Swallow Hotel building in Stockton has reached a disappointing impasse as the two companies who own the building and the lease respectively can’t reach an agreement to sort it out.

AG Lathe Castlegate Shopping Centre LLP (“AG Lathe”), owners of the Castlegate shopping centre also own the Hotel building but it is currently on a lease owned by Whitbread – a lease with 83 years still to run and costs currently estimated at around £0.5 million per year.

Whitbread want to surrender the lease but the two companies cannot agree a fee for that to happen.

Alex Cunningham, Labour MP for Stockton North, has met representatives from both companies at Westminster in an attempt to press for a deal to conclude the matter.  After another meeting with AG Lathe, he has now written to the Chairman of Whitbread asking him to personally intervene but also to explain why his company considers a re-opened hotel unviable.

“Our local Stockton Borough Council and partners like AG Lathe are investing vast sums of money and attracting new retail businesses to our High Street yet we still have one of the town’s key assets sitting empty.

“I have repeatedly challenged both companies to come to an agreement to either re-open the hotel or to redevelop the site.  Whitbread have confirmed they have no intention of re-opening it themselves, so they need to move aside and let someone else have the opportunity to develop there.

“Sadly, the two companies are some way apart in negotiating a deal for the surrender of the lease, but in the meantime the hotel remains empty and the prospect of developing the area is on hold.

“The people of Stockton are demanding a solution so I hope an appeal to the chairman of Whitbread will see the negotiations given a much higher priority and have offered to host a meeting involving all the parties involved in a bid to see some progress after years of delays.”