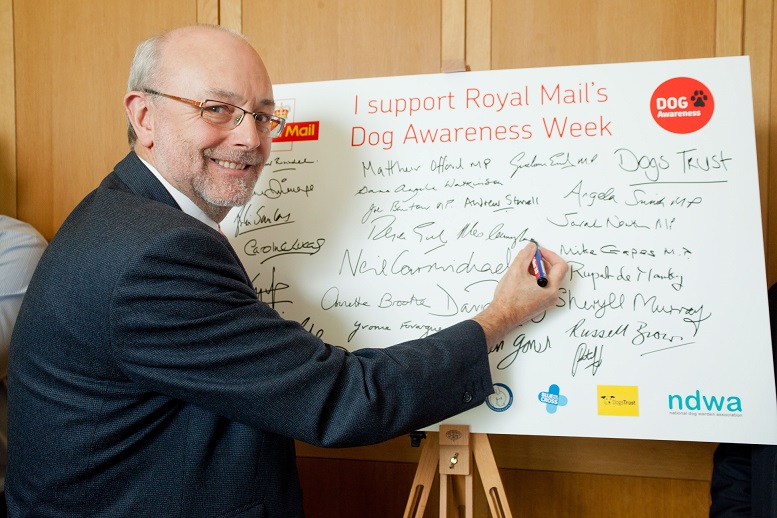 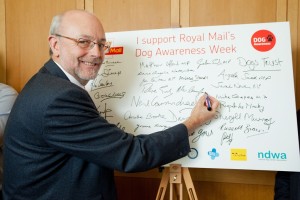 The MP for Stockton North knows a dog bite when he feels it – and has been hospitalised three times for stitches and on one occasion had his finger sewn up under general anaesthetic.

So Alex Cunningham, with Stockton Mayor Cllr Barbara Inman who has also suffered a serious injury, has lent his backing to Royal Mail’s annual Dog Awareness Week, working in partnership with the Communication Workers Union and with support from a wide range of organisations and animal charities including Battersea Dogs and Cats Home, Dogs Trust, Blue Cross, National Animal Welfare Trust, the Association of Chief Police Officers and the National Dog Wardens Association.

Dog Awareness Week, which runs from 30 June to 04 July, aims to raise understanding of dog attacks and to highlight the need for responsible dog ownership, as well as appealing to dog owners to keep animals under control when the postman calls to over 29 million addresses across the UK.

These attacks tend to be more common during school holidays and in the summer months when parents and children are at home and dogs are sometimes allowed unsupervised in gardens, or out onto the street without restraints.

“Royal Mail and partner organisations are doing a fantastic job promoting responsible dog ownership and highlighting simple steps that can prevent such attacks from occurring.

“It is worth remembering that MPs, councillors, activists and other campaigners are also at risk from dog attacks when out canvassing and leafleting in the local area.  Like many colleagues, I have been bitten by a dog myself when out leafleting so am well aware of the dangers postmen and women face every day when they are out delivering mail to my constituents.   The recent change in the law on controlling dogs adds an element of protection that I hope will encourage more responsible dog ownership and drive down the number of attacks that we continue to see.”

David Gold, Head of Public Affairs for Royal Mail, said: “Following the success of last year’s campaign, there is growing awareness of the issue of dog attacks and the problems our postmen and women face when they are delivering the mail.  However, last year there were still too many incidents in the TS postcode area and we need to reduce this number further as even one dog attack on our people is one too many.”