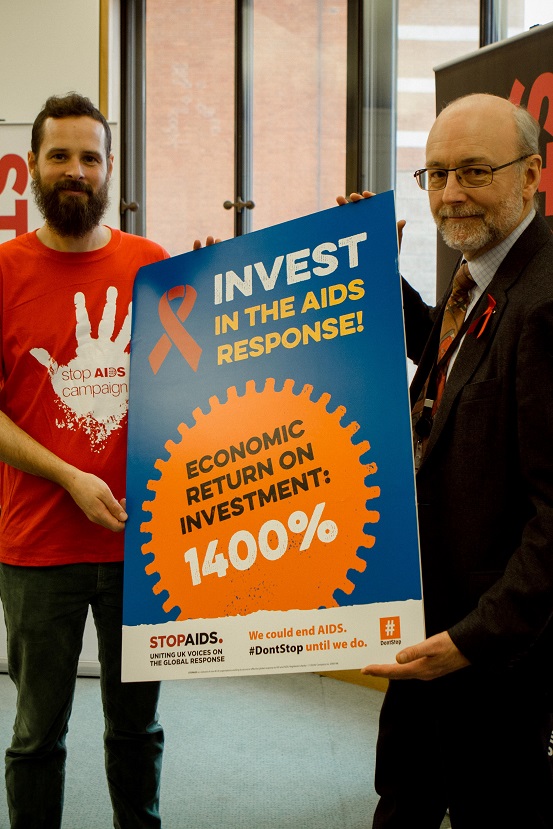 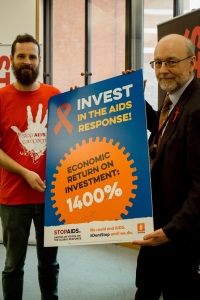 While there have been many scientific advances in HIV treatment amidst improved understanding of the condition, Alex Cunningham has urged world leaders to maintain focus in order to end the AIDS epidemic as he joined UK, international and student activists at a STOPAIDS parliamentary event to mark World AIDS Day 2014 on 01 December.

UK investment has helped to transform the global HIV response and Stockton North’s MP voiced his support for renewed UK leadership in the push to end the global AIDS epidemic by 2030.  Around 100,000 are currently living with HIV in the UK and globally an estimated 34 million people have the virus.  More than 35 million people have died from HIV, making it one of the most destructive pandemics in history.

The Labour Member of Parliament spoke with activists about how far we have come in tackling the AIDS epidemic, with more than 13 million people now accessing treatment – up from only 700,000 ten years ago.  AIDS-related deaths have also declined, from a peak of 2.2 million to 1.5 million in 2013.

Last year was the first when more people were added to treatment than newly contracted HIV, meaning we are getting ahead of the virus.  But there remains a long way to go before the end, and Alex Cunningham joined STOPAIDS in calling upon world leaders to rapidly scale up the response in the next five years, or risk seeing the epidemic spring back with a higher rate of new HIV infections than today.

“The results we have achieved through UK investment in tackling AIDS are astounding. We’ve saved millions of lives and now have the opportunity to push on and end the epidemic by 2030.  But many lives have been lost to AIDS, both in the UK and around the world, and millions more will be at risk if we become complacent.  I urge our Government to lead this global effort, remaining focused until the end.”

Ben Simms, Director of STOPAIDS, said: “We were delighted to have Alex’s backing in this effort.  His support has helped to ensure the UK is saving a life every three minutes through the Global Fund to Fight AIDS, Tuberculosis and Malaria.  This World AIDS Day, we remember the 35 million people who have lost their lives to AIDS and call all leaders to honour that loss by seizing the opportunity we now have to end the epidemic.”

Stranded Students to finally receive updated advice from the Government