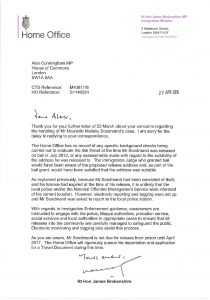 After receiving a response from the Home Office to his latest letter, Alex Cunningham has again criticised the Government for neglecting to put sufficient mechanisms in place to prevent the safety of people in towns like Stockton being jeopardised.

The Stockton North MP was speaking after forcing the Immigration Minister into the embarrassing admission that the Home Office has no record of any security checks being carried out on a dangerous criminal who was released on bail in the area. This is on top of local police and the National Offender Management Service being unlikely to have been alerted to the offender’s presence.

In April last year, Noureden Mallaky-Soodmand – who was the subject of a Deportation Order following previous convictions, as well as having a history of carrying offensive weapons – was arrested in Stockton after wielding a curved blade designed to decapitate while threatening to behead innocent passers-by in the name of Islamic State. He received a four-year prison term in September.

The Labour MP has now written to Home Office ministers on three occasions to clarify how such failings were able to come about when dealing with an individual posing a clear threat to the public, and to seek reassurances that lessons will be learned to ensure that communities will be better protected in future.

“The Home Office have again left themselves with questions to answer on this matter. I first wrote to the Home Secretary in September last year, but only after months of pressing has the Minister come clean and admitted that his Department has no record of even minimal security checks being carried out on this dangerous offender prior to his release.

“And to make matters worse, the Minister has now revealed that the suitability of the release address also went unchecked, showing scant regard for local people and putting communities in Stockton at risk by failing to alert either the local police or other enforcement authorities to his presence.

“The whole incident highlights perfectly the shortcomings of the Government’s approach and makes clear the need for a system that is much better coordinated between the courts and the various enforcement agencies.

“The Home Office must now review their entire procedure for handling cases such as this, learning the lessons that must be taken away from this incident to ensure there can be no repeat occurrences. It is unacceptable for such errors to happen once, but for them to be repeated would be criminal.”

Alex promotes a brighter future by turning off the lights