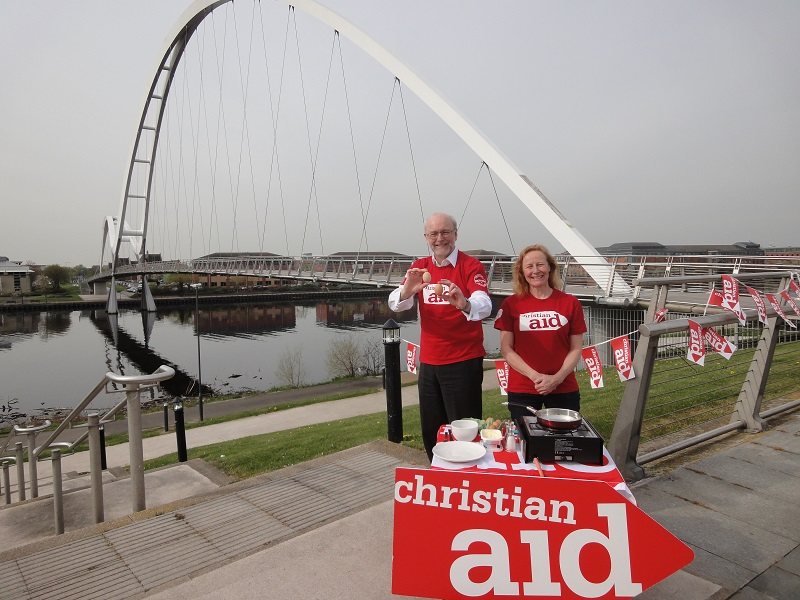 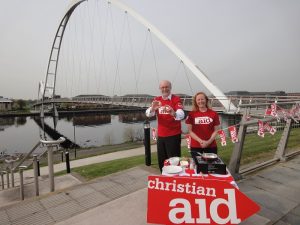 To advertise Christian Aid Week and Big Brekkie fundraising events in the North East, Alex Cunningham has been filmed cooking an omelette on Stockton’s dramatic Infinity Bridge whilst delivering a 90 second homily on the theme of “loving every neighbour”.

The Stockton North MP is one of several local politicians and church leaders taking part in Christian Aid North East’s “Extreme Omelette Homily Challenge”, taking in iconic venues such as the Sycamore Gap on Hadrian’s Wall and the roof of the Castle in Newcastle.

“I’m proud to work with Christian Aid and want to commend all those people in Stockton and throughout the North East who give their time and energy volunteering for Christian Aid Week; people who, through running collections, Big Brekkies and a host of other events show real love for their neighbours in need around the world.”

Whether through organising a Big Brekkie, coffee morning or house-to-house collection, money raised during Christian Aid Week – which runs from 15-21 May 2016 – could help give some of the world’s poorest people enough to eat and a safe place to call home.

Increasingly warm and wet weather can force families to flee their homes, causing homelessness and hunger.  As climate change continues to affect communities around the world, it is the poorest that are bearing the brunt.  For the 80 per cent of Bangladeshis whose lives depend on agriculture, this unpredictable weather is making it much harder to grow the food they need and communities will barely have time to recover from losing family members, homes, incomes and livelihoods before the next disaster hits.  It will become increasingly difficult to escape the cycle of poverty – almost impossible without help.

Kerry Crellin, Christian Aid’s Regional Coordinator, said: “It was great to have Alex taking part in our Extreme Omelette Homily Challenge and we hope these videos will inspire people across the North East to get involved in fundraising for Christian Aid Week.

“Christian Aid Week unites over 20,000 churches every year to achieve incredible things to support our global neighbours in need, who are often suffering through no fault of their own.  This is a great opportunity for the people of Teesside and throughout the North East to do their bit.  Last year people from the region raised £319,000 to tackle poverty in some of the world’s poorest corners.”