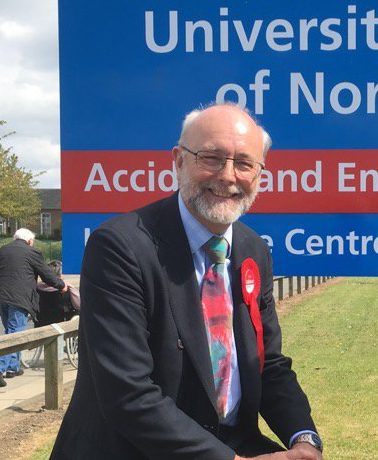 If the government has enough cash to spend a billion pounds buying the votes of the DUP to prop it up, they can afford to build Stockton’s much delayed new hospital, Labour MP for Stockton North Alex Cunningham, told the Commons today.

Speaking in the Queen’s Speech debate, he accused the Government of making big promises on healthcare, whist the words result in no action at all.

Alex has been a vocal campaigner against the proposed closure of the A&E Department at North Tees Hospital, meaning that Stockton residents would have to travel as far as Darlington in an emergency situation to receive urgent care. These changes would particularly affect those on lower incomes who likely do not have access to their own vehicle, putting them more at risk of fatalities arising from not receiving urgent care.

In his speech, the Stockton North MP also referred to a document he had acquired which had only a restricted circulation which spelled out the future of hospitals in the future. The document mentioned the need to hit financial targets, which Alex argues demonstrates that this Government cares only about cash.

During his speech, Alex said:

“It speaks of the need to hit the financial targets.  It means that the Darlington Memorial Hospital or North Tees in Stockton will be downgraded and the emergency service removed from one of them.

“Yes – it’s driven by costs; it’s driven by the fact that the Government have failed to train and recruit the consultants we need; and it’s driven without the approval of clinicians and the general public most of whom are being by-passed.

“The Government are trying to solve the wrong problem.  They’re trying to beat down budgets but use the shortage of clinicians as an excuse to reduce services.

“What we really need in Stockton is the new hospital axed by the Tory/LibDem Government in 2010.  The Government doesn’t have the cash – yet they found a billion pounds or more to buy the votes of the DUP to prop up their shambolic government.”

Alex MP’s smoking bill reaches the next stage in Parliament