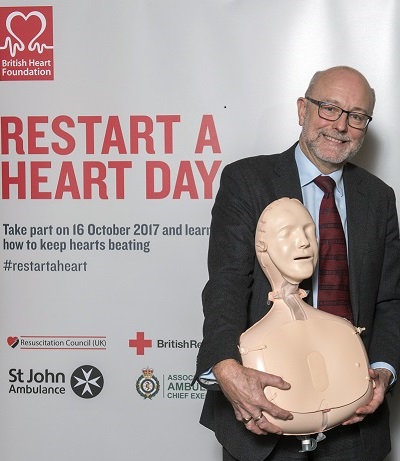 Memebers of Parliament join the British Heart Foundation, British Red Cross and St Johns Ambulance to train in CPR and show their support for Restart The Heart Day on 16 October 2017 Photography by DFphotography.co.uk / Danny Fitzpatrick

Stockton North MP, Alex Cunningham, has called on all secondary schools in Stockton North to introduce cardiopulmonary resuscitation (CPR) training for their students.

This follows a warning from the British Heart Foundation that people who have not been trained in CPR are three-times less likely to perform it.

As part of ‘Restart A Heart’ Day, Alex met with British Heart Foundation, British Red Cross, and St John’s Ambulance to discuss making CPR and first aid skills a vital part of the Personal, Social, Health and Economic (PSHE) curriculum. At this meeting Alex was told that only 1 in 10 of the 30,000 out of hospital cardiac arrests survive, and that rates of bystander CPR are very low. Every minute without CPR or defibrillation can reduce a person’s chance of surviving a cardiac arrest by around ten per cent.

Every second counts, and CPR really is the difference between life and death, and so it’s worrying to hear the number of lives being lost because due to the low rates of bystander CPR. There is clearly a huge benefit to the public knowing lifesaving CPR skills, which is evidenced by the vastly better survival rates from cardiac arrests in countries where CPR is taught in schools.

All young people should have the vital skills needed to save a life, and that’s why I’m calling for first aid and CPR skills to be added to the PSHE curriculum.

The British Heart Foundation, British Red Cross, and St John’s Ambulance all offer free training and resources for schools, which can be accessed via their websites. St John’s Ambulance’s ‘Big First Aid Lesson’, held on 3 November will be streamed into participating schools, and is open to both primary and secondary schools.