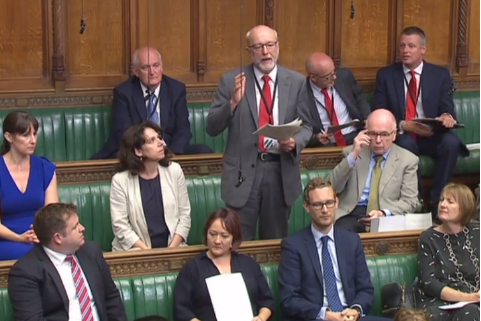 On the 25th January 1985 the Conservative Government promised there would be no nuclear waste dumped in Billingham anhydrite mine.  Will he confirm that promise still stands?

The mine underneath Billingham was closed off in 1978 and it was suggested only a few years later that the Government could use it to store nuclear waste, but this idea was dropped by 1985 after outcry from the public. It was only again in 2007 when a private company wanted to dispose low hazard waste in the site, which was approved in 2011 – but the permission required to carry it out ended in 2014 with no hazardous waste being stored.

Now the issue has come back up again as the government are once again looking for a site for the waste.

David Lidington who was stepping in for the Prime Minister said that he had no knowledge of the subject and will write to Alex to confirm the Government’s position.

I’m astonished that the PM’s deputy hadn’t been briefed about this week’s media stories on the Government’s own bribe to communities to store nuclear waste near their homes.

Over the last week the media were reporting that the Government was trying to by-pass local authority planning committees by offering communities bribes of £42 million to explore the creation of depositories in their area.

It is very clear to me that the Government are again on the look-out for a solution to the mounting nuclear waste problem in the UK – and will stop at nothing to get one.

I wanted to put down a clear marker with the Government that our community in Billingham and beyond fought for the promise from the Government in 1985 that they wouldn’t use the anhydrite mine as a nuclear dump– and will not sit back and let them revive any proposal to stick low and intermediate nuclear waste under our homes.