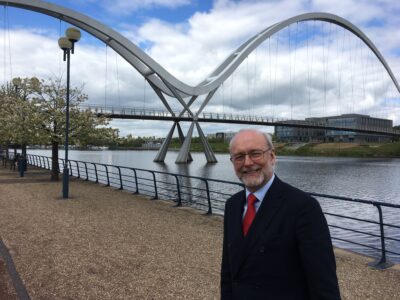 Stockton North MP, Alex Cunningham, and fellow Labour Tees MPs are seeking reassurances that the Eaglescliffe ticket office and waiting room will have a long-term future. This follows the announcement that Chester-le-Track – the company operating Eaglescliffe Station’s ticket office and waiting room for 18 years – will shut down at the end of March. The company’s announcement comes after a noticeable decline in ticket-office sales at Chester-le-Street station, with many commuters opting for ticket machines or online purchasing.

Five daily Grand Central direct to London trains run through Eaglescliffe Station, which first opened on 25 January 1853. The heated waiting room was opened in 2015 as a replacement for the older waiting shelters.

Eaglescliffe Station is an important commuter hub for our area, and has seen its usage grow considerably over the past number of years. The potential loss of the ticket office and effective closure of the waiting room would be quite a blow.

We’re keen to find a solution that would mean the ticket office and waiting room kept open – and have written to Northern Rail and Grand Central to ask what their plans are to ensure this vital service is kept at Eaglescliffe Station.

Options being suggested by Northern rail include: staffing the station with Northern Rail staff; assisting in the setting up of a new business on the station, and exploring a combined staffing option with Grand Central Railway. Northern Rail are also installing new ticket vending machines in the coming weeks.