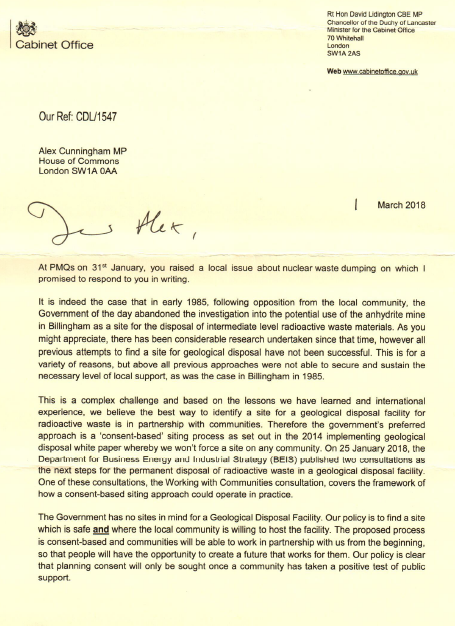 The mine under Billingham will not be used to dump nuclear waste unless the local community consents to it, confirmed a letter from Cabinet Minister David Lidington MP to Stockton North MP Alex Cunningham.

Back in January, Alex Cunningham asked a question during Prime Minister’s Questions whether there were any plans to store nuclear waste in the mine under Billingham, which the Cabinet Minister was unable to answer, instead promising to write to Alex with answer. After eight weeks and a further probe through raising a point of order in the House of Commons, Alex received a response confirming that the Government would be working with communities to find a suitable location, not overruling them.

In early 1985 following opposition from the local community, the Government of the day abandoned the investigation in to the potential use of the anhydrite mine in Billingham as a site for the disposal of intermediate level radioactive waste materials.

Commenting on the letter, Alex, said:

“Despite having to wait eight weeks for the response from the Minister, I am satisfied that the Government are not intending to use the mine under Billingham to store their nuclear waste, a move I know would be opposed by my constituents.

“I will continue to keep an eye on this issue, as successive governments have often backtracked on their words. I hope communities approached to store this waste will be properly consulted and that lessons from the past truly have been learned.”

Alex MP’s smoking in cars Bill passed in the Lords