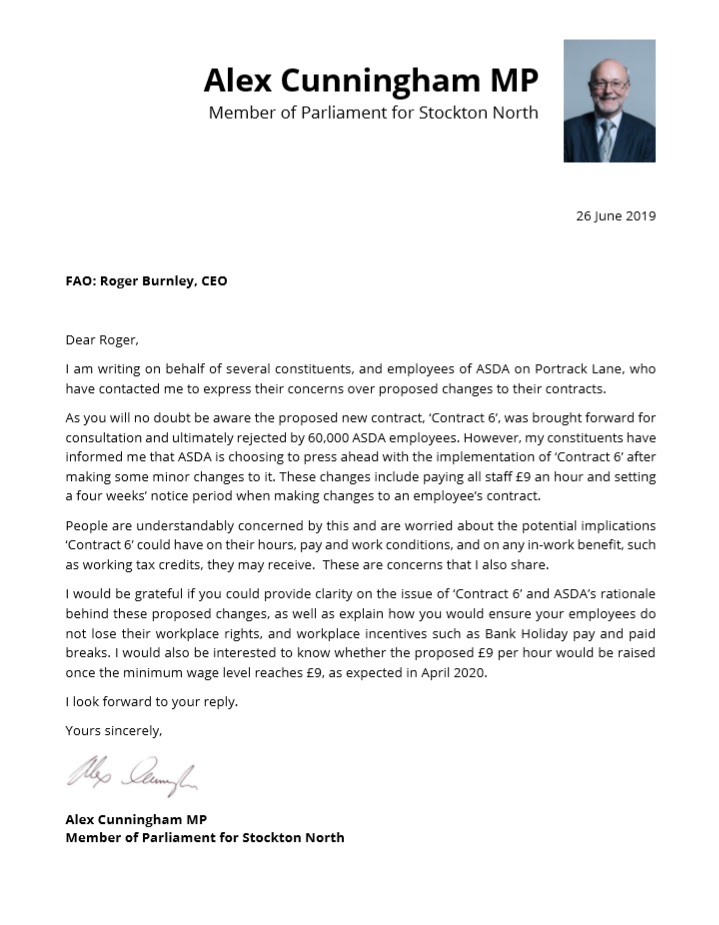 Stockton North MP, Alex Cunningham, has written to ASDA CEO Roger Burnley, to seek clarity on proposed contractual changes – known as Contract 6 – which could affect 60,000 employees including many in Stockton North.

The contract, which would see workers no longer paid for any breaks and forced to work bank holidays in return for £9.00 per hour pay rates, was rejected by employees in May but ASDA are pressing ahead with the changes.

The trade union, GMB are also campaigning against these proposals.

In his letter, Alex states that “people are understandably concerned by this and are worried about the potential implications ‘Contract 6’ could have on their hours, pay and work conditions, and on any in-work benefit, such as working tax credits, they may receive”. Alex is asking for assurances from Mr Burnley on ASDA employees’ rights, as well as whether the proposed £9 an hour will be adjusted once the Minimum Wage is adjusted to that figure in 2020.

ASDA employees – and their trade union, GMB – are rightly concerned that these changes will have a negative effect on their take home pay, hours and workplace rights. The deserve real answers about what these changes means – answers they’ve not yet received from bosses.

I hope Mr Burnley will be able to provide employees and myself some clarity in his response.