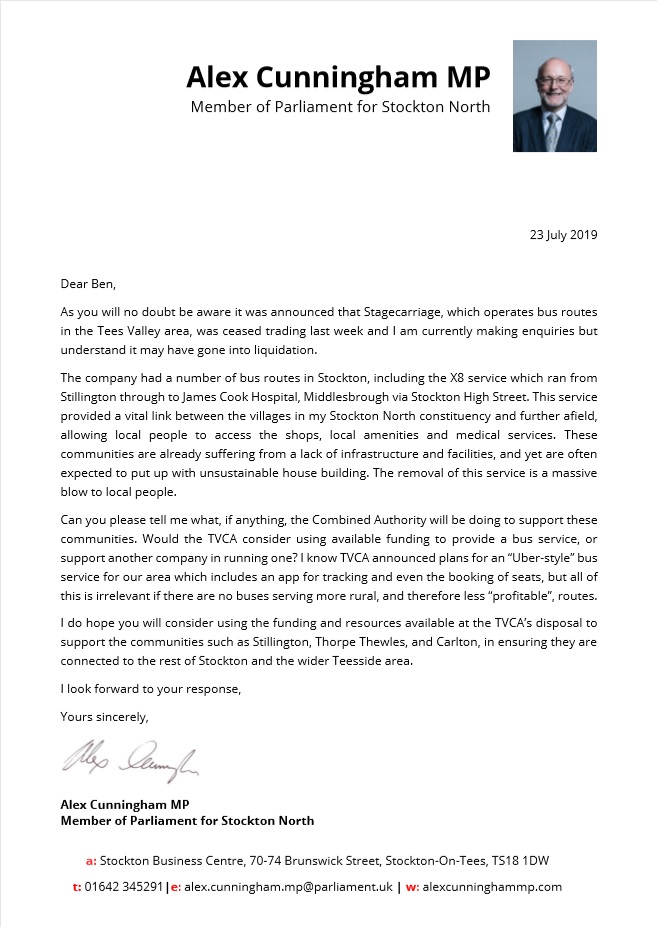 Communities face being left behind and the Tees Valley Combined Authority needs to step in, says Stockton North MP Alex Cunningham, in light of the news that Stagecarriage has ceased operating.

News that the bus company had stopped trading emerged on social media last week. The operator, which ran a number of routes across Stockton North, provided a service – the X8 – between Stillington and other villages in Stockton North, and James Cook Hospital, Middlesbrough, via Stockton High Street.

Local residents have expressed their concern that without this bus service the villages have been effectively cut off from the rest of Stockton-on-Tees and the wider Teesside area.

Now Alex has written to Tees Valley Mayor Ben Houchen asking that he uses Combined Authority funds and resources to either fund a bus service or support a company to run one.

I’m seeking clarity on the status of Stagecarriage but understand that the company has gone into liquidation.

This is a massive blow to local people and communities who are already suffering from a lack of infrastructure and facilities, and yet are often expected to put up with unsustainable house building.

The Mayor and the Combined Authority need to step in and commit funding to ensure that local communities like Stillington, Thorpe Thewles and Carlton are not left behind.

If Mayor Houchen can spend millions on an airport, I’m sure he can find the funds to support a bus service.