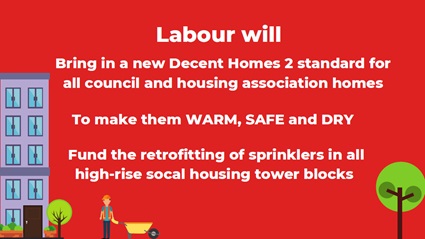 The Government will miss their targets for removing Grenfell style ACM cladding off tower blocks by almost a decade, according to the latest analysis.

After repeated calls from the Labour Party, the Conservative Government finally set targets, just before the summer recess, to see social blocks completed by the end of the year and private blocks by June 2020. In the last month for which there are figures not a single council or private block has been made safe.

On current pace, the social sector won’t be made safe until December 2021 and private blocks until May 2030. In the North East there are an estimated 200 social sector dwellings with Grenfell style ACM cladding yet to be remediated, affecting an estimated 480 people.

In total, in North East there are an estimated 500 dwellings with Grenfell style ACM cladding yet to be remediated, affecting an estimated 1200 people.

The government has at long last set a deadline to remove ACM cladding, but at the current pace of work they will miss that target by a whole decade.

Ministers need to step in and help councils who are struggling to get this work done promptly. And they must clarify what enforcement action they will take against private block owners who fail to make their buildings safe. Labour has been clear that sanctions should include confiscation of blocks where necessary.

The Labour Party has set out a five-point plan to force the pace of re-cladding on private tower blocks including updating the sanctions available to councils under the Housing Act 2004 to include fines followed by confiscation of blocks that still have dangerous cladding.