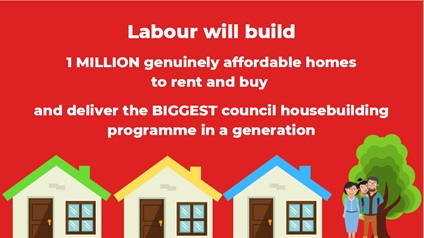 New analysis shows at the current rate of building of council and social homes, it will take 131 years to house all 1.1 million people on council housing waiting lists.

Over the last three years for which there are figures, an average of 2,123 council homes have been built, whilst 6,374 homes for social rent have been built.

A total average of 8,497. There are 1,114,477 household on local authorities’ waiting lists which, if divided by 8,497 would equate to 131 years to house everyone on council waiting lists.

In Labour’s last year in power 33,491 homes were built for social rent. That compares to just 6,434 homes built this year. The failure to build social homes has hit the hopes of local people too.

In Stockton on Tees borough the number of social homes built in 2010/11 was 84 compared to 7 in the last financial year for which there are figures – 2017/18. There are 4,307 households on housing waiting lists.

After nine years of failure the Conservatives have no plan to fix the affordable housing crisis. It is indefensible that communities are losing affordable homes when they have never been so badly needed.

Labour will stop the conversion of social homes into more expensive housing and build a million low-cost homes, the majority for social rent.