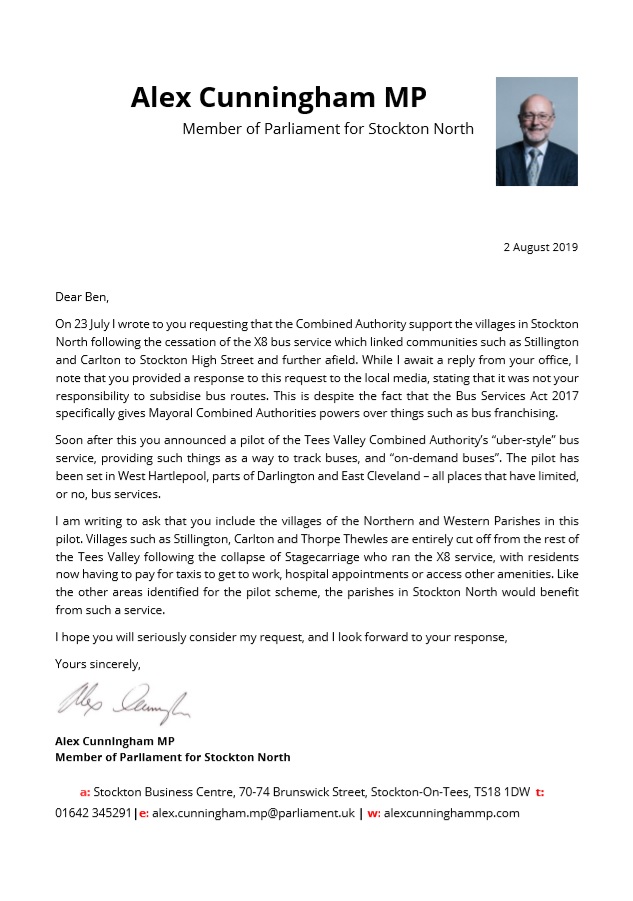 Stockton North MP, Alex Cunningham, has secured a pledge by the Tees Valley Mayor to look at the inclusion of the villages of Stockton North – including Stillington, Carlton and Thorpe Thewles – in the “Uber-style” bus pilot scheme being trialled by the Combined Authority.

The agreement to explore their inclusion comes after Alex wrote to Mayor Houchen asking for the Combined Authority to use its powers over buses and public transport to intervene following the collapse of Stagecarriage.

The company provided the X8 service which connected the villages of Stockton North to the wider Teesside area. The loss of the service has resulted in the villages having no bus.

Communities such as Stillington and Carlton have been cut off from the rest of Teesside following the loss of their only bus service, and people are now having to spend money on taxis to get to work, the hospital or to get into the high street.

The Tees Valley Mayor has the power to take control of buses, and provide a service that puts people before profit. I welcome the announcement of an “Uber-style” bus pilot, and I am delighted that he has agreed to look into the inclusion of these villages in the pilot at my request.

I seriously hope the villages do become part of the pilot – these communities desperately need a bus service.

Cleveland Fire Service Privatisation could be on the cards