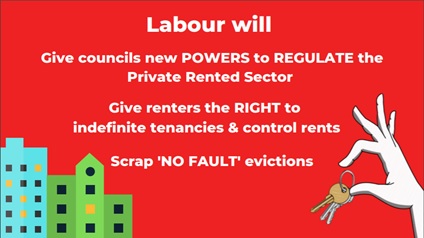 New House of Commons analysis released shows that over two million private renting households in England currently pay more than a third of their income in rent.

Official figures show that the building of homes for affordable home ownership has fallen to a 27 year low under the Conservatives and the number of new social rented homes has fallen by over 80%. 30,000 fewer socially rented homes are being built each year than under Labour making it harder for families to meet rising housing costs and impossible to build the homes the country needs.

Labour has pledged to build a million affordable homes over ten years including homes for living rent linked to a third of average local household incomes. Living rent homes are part Labour’s long-term plan to establish new types of housing linked to what people can afford to pay, not what landlords or developers can get away with charging, and would form part of Labour’s programme to build more new homes of all types, for rent and for sale.

The failure to tackle the rising rent costs has hit the hopes of local people too. In Stockton-on-Tees rent has increased from £540 in 2013-14 to £559 in the last financial year.

After nine years of failure the Conservatives have no plan to fix the cost of housing crisis.

Millions of people are paying more than they can really afford in monthly rent, while new social housebuilding has dropped to the lowest levels since the Second World War under this Government.

Labour would build new ‘living rent’ homes priced to be affordable to those on ordinary incomes and young families so they have a bit more for the things they need and can save for a deposit to buy that special first home.