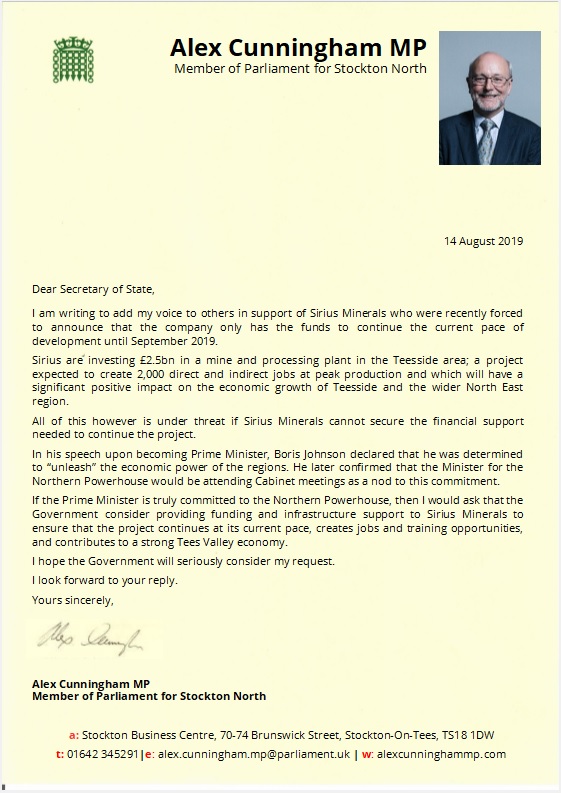 Stockton North MP, Alex Cunningham, has added his voice to the local calls for support to Sirius Minerals in his call for the Government to provide a funding guarantee for the company.

Sirius Minerals, which is working on a £2.5bn project to deliver a mine and processing plant in the Teesside area, recently announced that international “trade wars” are damaging the company’s chances of securing major investment needed to continue the project.

The company advised that current funding will only take them to September at the current pace. The £2.5bn project is expected to create around 2000 direct and indirect jobs in the Teesside area.

In a letter to the Business Secretary, Alex emphasised that the project “will have a significant positive impact on the economic growth of Teesside and the wider North East region”, and called on the Government to “consider providing funding and infrastructure support” to ensure its continuation.

On the steps of Number 10, Boris Johnson told the nation that he was determined to “unleash” the economic power of the regions. He later confirmed his Minister for the Northern Powerhouse would attend Cabinet in a nod to this pledge.

If the Prime Minister is serious about the Northern Powerhouse then backing Sirius Minerals is a must. He should put his money where his mouth is and provide a package of financial and infrastructure support to the company.

This project is about the future economic prosperity of the Tees Valley as a whole, the Government must do all it can to ensure it continues to be delivered by the set timescales.