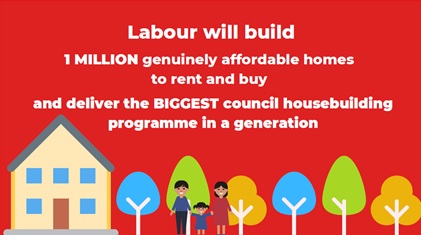 At the current rate of growth in new homes built a year it will take the Tories 13 years until 300,000 homes are built annually in England, nearly double the time that Ministers have pledged.

They promised to hit their target in 7 years, yet new Labour analysis shows it will take 6 years longer than promised.

In the November Budget 2017, the Chancellor promised that by the middle of the next decade we’d be building 300,000 homes a year.

Over the last 5 years the average year on year increase in number of homes built has been 11,283.

The failure to build the new homes needed has hit the hopes of local people too. In Stockton on Tees borough there have been 670 homes built on average over the last five years. This compares to 1030 in the year before the financial crisis.

This is more worrying evidence of a housing crisis that Tory Ministers are failing to fix. “After nine years of failure in Government, housebuilding is still lower than under Labour and it will take nearly twice as long as Tory Ministers promised to hit their own target.

Rather than cutting back on new investment in affordable homes, the Conservatives should back Labour’s plans to invest to build a million new genuinely affordable homes, including the biggest council housebuilding programme in nearly forty years.”