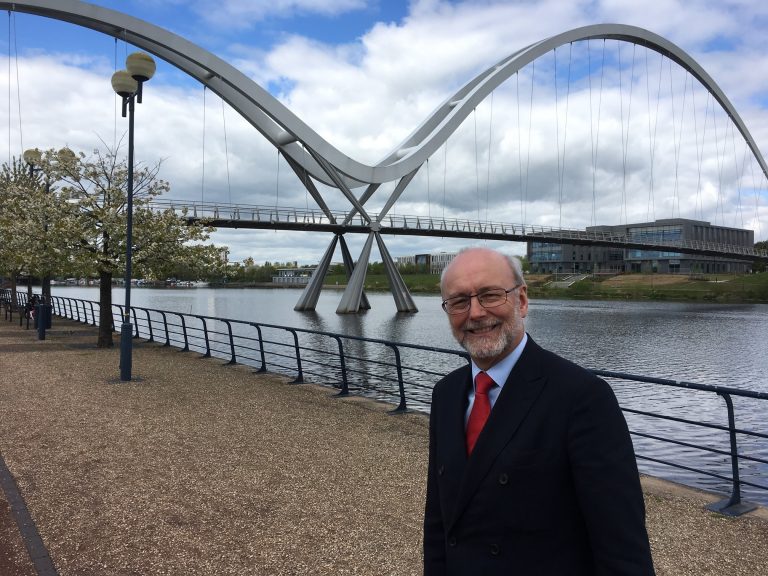 I work and campaign on many issues in Parliament – some national or international but most directly related to the area I represent.

I set up and chair the All-Party Parliamentary Group on Carbon Capture and Storage (CCS), and consistently champion Teesside as a potential home for CCS and large-scale industrial decarbonisation in the UK. I am proud to represent a Teesside constituency and it is deeply frustrating for me to see the potential we have to be a key CCS site whilst the Government talks a good talk but appears slow to take real action.

The Teesside Collective are based in our area, and one of their key projects is decarbonisation. The Collective is industry-led, they know what they are talking about and know what they can achieve given the right environment. Our industries need to know the Government is on their side, that they are prepared to work in partnership and share the financial risk as CCS is developed.

I’ve been championing Stockton’s High Street and holding to account short-sighted retailers who refuse to consider local conditions before making commercial decisions. Our High Street has undergone a multi-million-pound investment, was named a “Rising Star” in 2016, and will soon see the reopening of the Globe Theatre – attracting hundreds of people to our area. It is also home to some thriving independent shops and businesses.

Unfortunately, many big-name retailers such as Marks and Spencer, Thornton’s, and Debenhams have chosen to put short-term profit making before anything else and have left our shop fronts empty. That’s why I’ve challenged these big businesses and called for them to reconsider their decisions – and help make Stockton High Street a success.

Campaigning to protect the villages from unsustainable developments

I’m supporting residents of the villages and have campaigned against unsustainable developments. We’ve seen a number of inappropriate housing developments proposed for the Thorpe Thewles area in recent years, despite the fact that Thorpe Thewles is regarded as an unsustainable village, with limited infrastructure and amenities. Despite objections from residents, and refusal from Stockton Council’s Planning Committee, many of these developments have been approved by the Government on appeal.

Recently, I’ve been working with local residents to seek clarity on Statera Energy’s proposals to build two gas powered stations close to Thorpe Thewles and Carlton. Permission has already been given for an electronic battery-powered station, but now the company wants to not only convert it to gas-power but double the number of stations. Once again it appears that the plans might by-pass local decision makers, and I’m calling on Statera Energy to ensure that local voices are heard in this process.

Alongside my fellow Teesside MPs, I led an adjournment debate in Parliament to highlight proposed changes to respite care for vulnerable adults by the local Clinical Commissioning Groups. While the CCGs say their proposals will expand the service, it is clear there is no extra funding for the services. My concern is that the changes such as home-based respite, will not give carers the time off they need – and that these changes are being forced due to cuts to funding rather than the needs of carers and their families.

We owe carers a lot for their selfless work and should provide them with the care and support they deserve. Unfortunately, our carers are losing confidence in the system – I’ll continue to champion the work carers do and call for the Government to properly support our carers.

I held a series of meetings with the Police and Crime Commissioner for Cleveland after residents raised their concerns about an apparent upsurge in anti-social behaviour across parts of Stockton North. At the meeting, I stressed that what people want most of all, is to see their local police officers and PCSOs out and about in their neighbourhoods and responding more quickly when incidents are reported.

To do this however, Cleveland Police require more funding from central government and unfortunately this does not appear to be forthcoming. I will continue to press the Government and Cleveland Police to put more visible police on the streets.  Sadly a letter I wrote with the other Cleveland Labour MPs and Police and crime Commissioner has been ignored by the Home Secretary.  We are keeping up the fight.

The NHS is in crisis and in desperate need of funding, and NHS dentistry is fast becoming the Cinderella service of our healthcare system. Following the closure of one prominent dentist clinic to NHS patients, I led a campaign – including a public meeting – to highlight the issue of poor funding to NHS dentistry, the lack of NHS availability, and for NHE England and the Government to support this service.

Following this campaign, NHS England agreed to put £1 million into supporting existing dentists in the Stockton Borough and put out a contract for two new dentists in Billingham. However, I will be continuing my calls for the Government to properly fund NHS dentistry and have also taken a role encouraging changes in Labour Party policy to give patients a better deal.

Holme House has been hit with a number of problems recently, including a shortage of fully-trained prison officers, an increase in violence and the prominence of the ‘zombie drug’ commonly referred to as Spice. I have visited the prison several times and written to the Government and lobbied Ministers for some time regarding the situation at Holme House, unfortunately with limited success.

Despite launching a pilot scheme to combat the drugs issue in our prisons, the Government has not seen fit to include Holme House within this. While I welcome the installation of the scanners to detect drugs concealed in people’s bodies which I had been pressing for some time, I only hope that they start to have an impact. I will not stop lobbying the Government to do more in regard to Holme House, not only to tackle drugs but to ensure our prisons are fully and appropriately staffed.

I’m determined we achieve the aim of having a smoke free generation and have called on the Government to look at measures such as reducing young people’s exposure to smoking in film, television and other media; increasing the age of sale to 21; introducing retail licensing for the sale of tobacco; more comprehensive services for those with mental health conditions and for funds for regional activity to support enforcement.

Two of my principal concerns are the much higher incidence of smoking in disadvantaged communities and how we denormalise smoking and tackle health inequalities by funding mass media campaigns and better services for people with mental health conditions. It’s clear the Government need to do more and support this campaign with funding – which is what I’m calling for.

Alongside campaigners, I’ve been campaigning against the Government’s plans to downgrade North Tees Hospital’s Accident and Emergency Department – arguing that the move would force people to travel longer for emergency care.

I therefore welcomed the announcement that, after a three-year review, plans to downgrade the service have now been dropped.  I am pleased to see that NHS bosses have listened to people’s concerns and acted accordingly. I note, however, that the announcement did not commit to the longer-term future of North Tees’ A&E department, so will continue to press the Government for assurances that North Tees Hospital will always be home to a local A&E service.