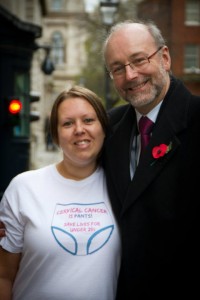 MP Alex Cunningham joined forces with constituent and cervical cancer survivor Lisa Askew to present a petition, calling for the age range for cervical cancer screening to be lowered, at the door of No. 10.

Lisa collected over 11,000 signatures from people who believe cervical cancer screening should begin for women aged 20 rather than 25 as is the case now. Following the presentation, Alex said:

“I am hugely impressed by the hard work that has gone into this petition. Lisa is an inspiration and I was honoured to be with her as she presented her petition at No. 10.

We will have to wait and see what response the petition receives from the Government. In the meantime, I hope to raise this issue with Health Ministers at the earliest opportunity in the House of Commons.”

“In Scotland, Northern Ireland and Wales women are invited to take part in cervical cancer screening tests from the age of 20. In England, screening does not begin until a woman reaches 25.

My personal battle with cervical cancer inspired me to fight this campaign and presenting this petition at the door of No. 10 was a huge moment for me. I believe lowering the screening age to 20 would save lives and I am not going to give up without a fight.”