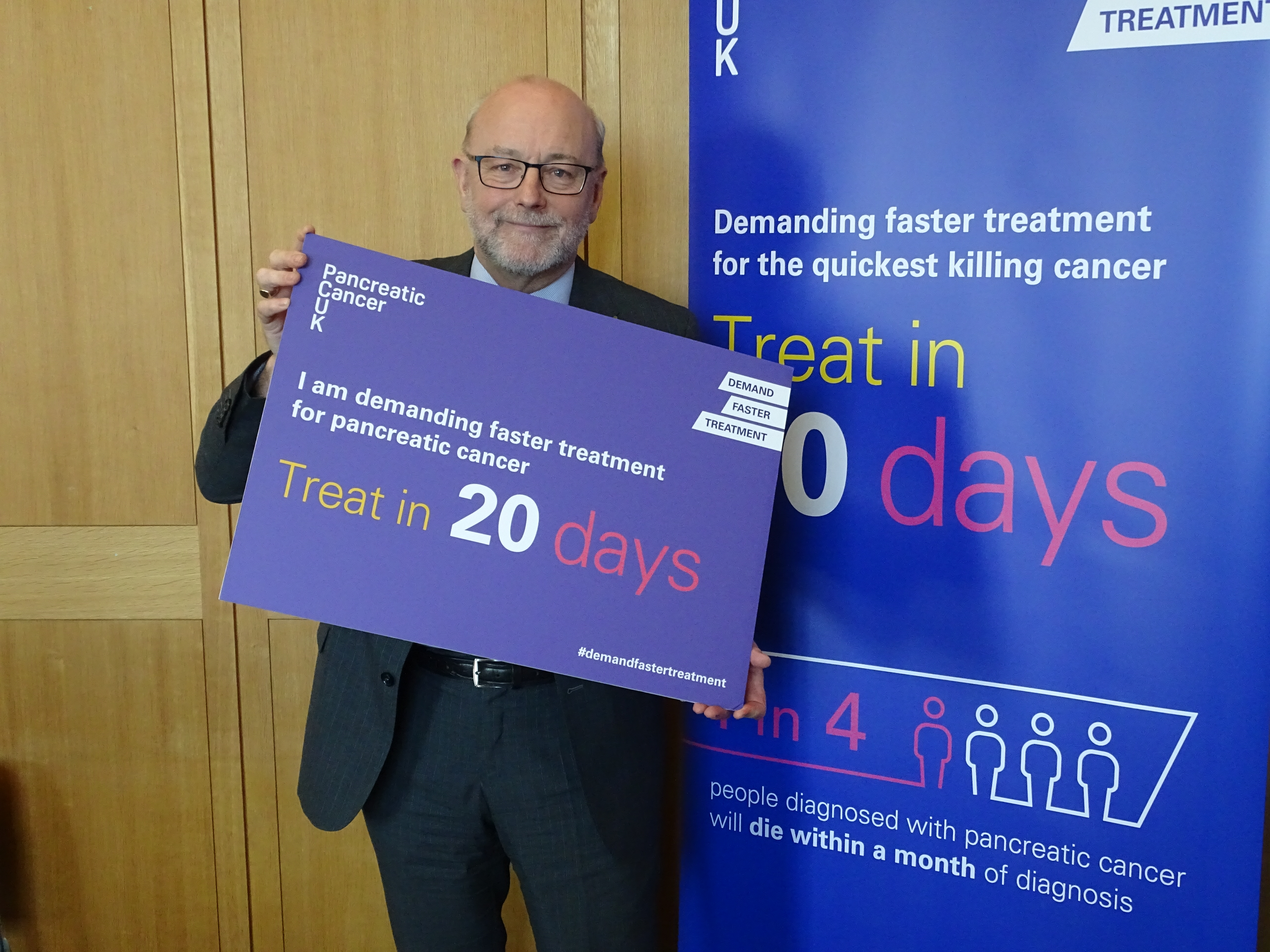 Alex Cunningham MP has pledged his support to Pancreatic Cancer UK’s campaign demanding faster treatment for people with pancreatic cancer – one in four patients with the disease die within a month of diagnosis making it the quickest killing cancer. The charity is calling for the Government and devolved administrations to set a new ambition to begin treatment for all pancreatic cancer patients across the UK within 20 days of diagnosis by 2024.

At the launch of Pancreatic Cancer UK’s Demand Faster Treatment campaign, Alex Cunningham MP heard that if avoidable delays to treatment were removed many more pancreatic cancer patients could be eligible for surgery – the only current cure for the disease. To help achieve this ambition the charity  is recommending the roll-out of a new treatment programme which in a recent trial successfully reduced patients’ time to surgery from two months to just over two weeks.

“45 people in NHS Hartlepool and Stockton-on-Tees are diagnosed with pancreatic cancer each year and tragically less than seven per cent won’t survive beyond five years. This is unacceptable and much more needs to be done to improve the outcomes for people with this deadly disease.

“I hope everyone in the Stockton North will join me in backing this campaign to transform the future for people diagnosed with pancreatic cancer and help them receive treatment before it is too late.”

The charity released a report to coincide with the campaign launch which revealed that pancreatic cancer patients who have surgery are ten times more likely to live for five years or more than patients who do not (22.3 per cent compared with 2.3 per cent) (1). However, at least 90 per cent of all patients diagnosed with pancreatic cancer do not have surgery (2). In North East and Cumbria only 8.2 per cent received surgery.

New analysis by Pancreatic Cancer UK shows that if even a modest increase in the proportion of patients receiving surgery (from the current rate of less than ten per cent, to just 15 per cent) was sustained over five years, it could give 2,100 more patients across the UK at least a year of precious time with their loved ones and potentially be lifesaving (*).

To help achieve the increase, the charity is calling for the introduction of accelerated treatment models for pancreatic cancer within the NHS similar to those which are already in place for more well-known cancers such as breast and prostate. This would include establishing one-stop clinics where patients can have all tests to determine their suitability for surgery in one place. Clinical nurse specialists would be recruited to coordinate with other NHS services addition to supporting patients.  Implementing both of these measures would significantly speed-up treatment decisions. The number of tests required, the wait for results, and the need to consult doctors from multiple specialisms due to the complexity of pancreatic cancer are major causes of delays in treating the disease when there is no time to waste.

“We’re extremely grateful Alex Cunningham MP has shown his support for our Demand Faster Treatment campaign. Too many pancreatic cancer patients are being denied their only chance of survival because they are simply not being treated fast enough. One in four people diagnosed with this devastating disease die within a month, making it the quickest killing cancer. It’s so ferocious that patients cannot afford to wait. In recent years we have seen outstanding progress in other cancers such as breast and prostate, and a shocking lack of progress for pancreatic. Together we can change that.

“We are is urging people from Stockton North to take on this deadly cancer and sign our petition calling on the government to recognise pancreatic cancer as an emergency. We owe it to all those affected by pancreatic cancer to be more ambitious and make sure that everyone is treated within 20 days of diagnosis.”

Pancreatic Cancer UK is calling on the UK Government and devolved administrations to set a new ambition to treat all patients diagnosed with pancreatic cancer in 20 days by 2024. To find out more about the Demand Faster Treatment campaign and sign the petition, visit: www.pancreaticcancer.org.uk/demandfastertreatmen